The name KiDo is made up of two old oriental concepts Ki (氣) and Do (道).

Ki has originally meant life force, the vitality of all living things and also strength. Later, its meaning has expanded to include all things that cannot be clearly defined, but they are nevertheless perceptible and observable. It means also things that are not tangible, such as essence, idea, spirit, potentiality etc. Science rejected the concept of life force in the 19th century because it was too vague for mathematical models and introduced the concept of energy.

Do literally means a path or road. The concept describes the underlying natural order of the universe and the way how universe works. It also means principles and teachings. We can experience this natural order when we perceive the world through a calm mind. The concept, therefore, refers to the understanding of things by experiencing them directly.

The world is in constant change, and caused by this change is this continuous interaction between things. This constant interaction affects everything in our lives and it can be seen everywhere in our surrounding. We call this interaction as natural relationship.

Art of Natural relationship is based on the development of interaction intelligence. Its main principles are awareness, skills and connection. 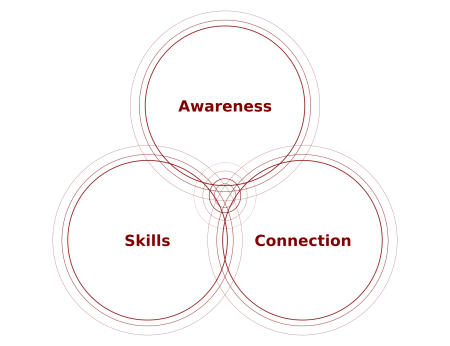 Awareness is based on the information we obtain through perception. The information we get, builds our understanding of ourselves and the outside world. The more aware we are, the better decisions we make.

Skills are based on mind and body coordination. By understanding our own inner world and learning to direct our attention consciously, we are able to develop our skills in the best possible way and gain better control over our own lives.

The connection links things together. Understanding it is an essential factor in life and successful operation. We can’t separate ourselves from the environment, we are constantly affected by it, so establishing a good connection with it is paramount.

Interaction intelligence combines awareness, understanding of our connection to the environment, and our ability to act in a situation.